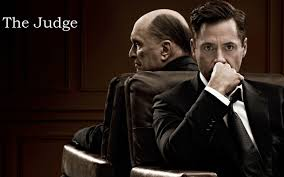 The movie centers on Defence attorney Hank (Robert Downey Jr) who is a little on the callous side defending guilty people with money by bending every rule he can. “Innocent people can’t afford me”, he tells another attorney who is outraged at his lack of morals. Hank has to return to his hometown to attend his mother’s funeral when we meet Hank’s father (Robert Duvall), a prominent judge from their hometown in Indiana. Joseph Palmer (Duval) is a veteran judge who imposes his highly moral standard on all those he presides over. He has little tolerance for lawyers like Hank. The relationship between father and son is strained (to put it lightly) and highly charged making for a very emotional rollercoaster of antagonism and disdain between the two. (And an entertaining match up for us viewers to watch!)

Things really get heated when the Judge is suspected of killing someone with his car (I won’t give any details for fear of a spoiler) Hank of course wants to represent his father but the Judge will not hear of it. We see a lot of the cool disdain both characters have for the other with the underlying family issues that really set things on edge. Old grudges and bad feelings are at the forefront until Hank learns of his father’s illness. The movie takes on a very emotional hinge that really sets you up to understand the tolerance and acceptance family’s face regardless of what has happened before.

I have to say this movie was really well done. The courtroom drama was great, the family interaction and dynamic was amazing with these two actors and entertaining to watch (a little humour thrown in) and even the illness was made very realistic and hard-core. There were some great supporting roles with Hank’s brothers (Jeremy Strong and Vincent D’Onofrio play Dale and Glen) as well but I won’t go into it here. Billy Bob Thornton plays the prosecuting attorney as well and has a grudge against Hank. I wasn’t a big fan of this role for him, but it was done very well.