I am very excited to announce that Oliver Chase’s new book, Marsh Island is being released today by AEC Stellar Publishing, Inc.

Oliver F. Chase is a veteran Marine with a career in the FBI, whose mystery/thriller book, MARSH ISLAND (AEC Stellar Publishing Inc., November 22, 2013), is the first installment of The Hirebomber Series.  Price: $13.79

After a crushing injury, Army Ranger Phil Pfeifer is left for dead in the mountains of Iran only days before the start of the Gulf War. America cannot reveal such a violation of national sovereignty mere days before Kuwait is invaded. The body may heal but the heart takes longer. Seeking a new life as a private investigator, Phil is hired to find a wayward husband who’s become enraptured with stars and predicting the future. A simple case and the midlife crazies stop when a boat captain is murdered at his feet and the Mafia chases him through the backstreets of Las Vegas. Pleading with Phil to continue, the terminally ill wife sends him into the tropics to face death, sharks, miles of open ocean, and prison.

Here’s what others are saying about it:

“What an absolute thrill. The mystery left me unable to guess what would happen next, and the prose was both delightful and haunting. Oliver F. Chase created a troubling beauty, even in the desert landscape, and the stars were as bright as the storyline. A great read for fans of detective fiction, suspenseful mystery, and thrillers.”

“The characters seemed real and knowable, and there was a wide variety of them. The author has a knack for description, not only for people but also for locations and situations! The book was a page-turner. I wanted to read just one more chapter before putting it down.” 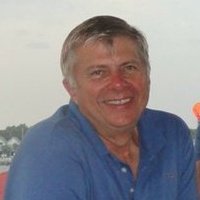 Oliver graduated high school and would be able to fly, which was really all he ever wanted. The war was on and the Marines offered a way.  He took it. Some five years later, Oliver was a vet with a Distinguished Flying Cross and a long list of combat missions – even a couple in that dark, secret world of political deniability. Oliver spent five years in a police department working narcotics and SWAT, and the next 22 in the FBI. He and his wife live on a small farm along the Gulf Coast near New Orleans.